Evan’s nursery has been in dire need of some decorations to liven it up for awhile now. I’ve looked on Pinterest, and seen some things I like:

Quotes, books, shelves… I had even found some cute prints on Etsy that I considered. However, I wanted cheap, and easy.

Yesterday, I found the solution.

Eddie had an interview, so I took Evan to Michael’s. I actually had him in a sling out in public for the first time, and oh boy, did a lot of people come up to me. One woman actually touched him. And here I thought people were less likely to touch babies when they were being worn – but that would mean people have to respect bubble space. They clearly do not.

For Christmas, my mother gifted me two 8.5″ by 11″ frames to use in Evan’s bedroom. Now I just had to fill them.

I walked up and down aisles, looking for big stickers, decals, anything that would look alright. Eventually, I thought that maybe I could find some plain scrapbook paper to use.

First, I saw birds. I do love simple birds. Then I saw rainbows. While they would match nicely, in my opinion, I didn’t really think they looked right for the room. However, I loved them.

Then, I found something perfect. A sailboat paper. It was on clearance for 29 cents! Soon after, I found a paper with miscellaneous forms of transportation in cartoon form. While they didn’t quite match each other – they worked for a boy’s room.

Maybe someday I’ll do something that matches the room and theme more – or maybe not. I like the idea of a random pop to them. Especially now that Evan is noticing more colors and patterns. We want to put something between them, but we aren’t quite sure. Also, on the opposite wall, above the changing table, we want to put shelves of some sort. And yes, we currently “line dry” our diapers over the edge of the crib – Evan isn’t sleeping in it yet, and it works. We’ll get a drying rack some time before he does. 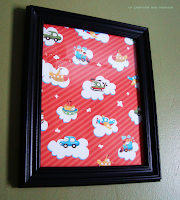 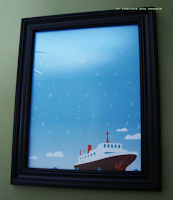 As for the theme of the room, another Christmas gift from my mom was a Scentsy monkey. He lives on top of the armoire. Along with some random bears, also from my mother. 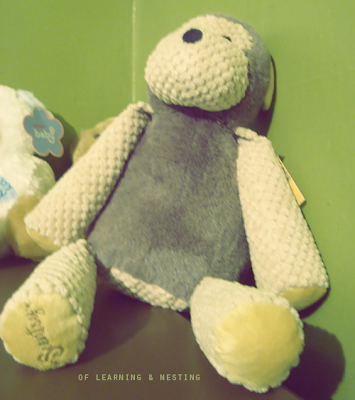 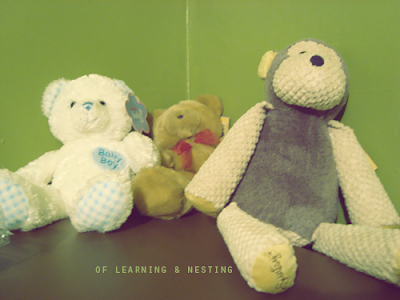 I think I’ll use the other two scrapbook papers to decorate my desk area in the basement. It’s currently unused and a total mess. Maybe if it were brighter, I would be more inclined to do something with it. Maybe.